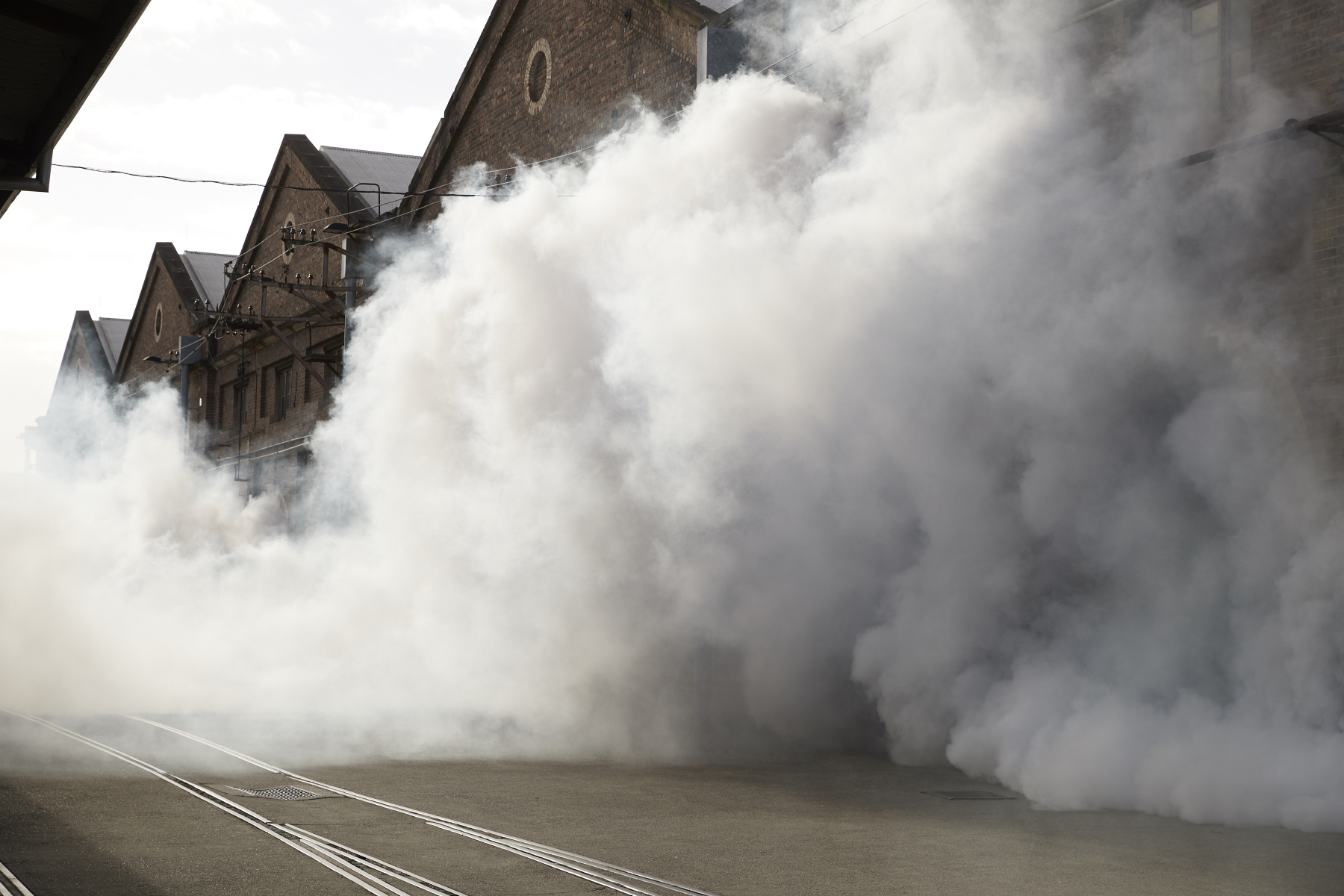 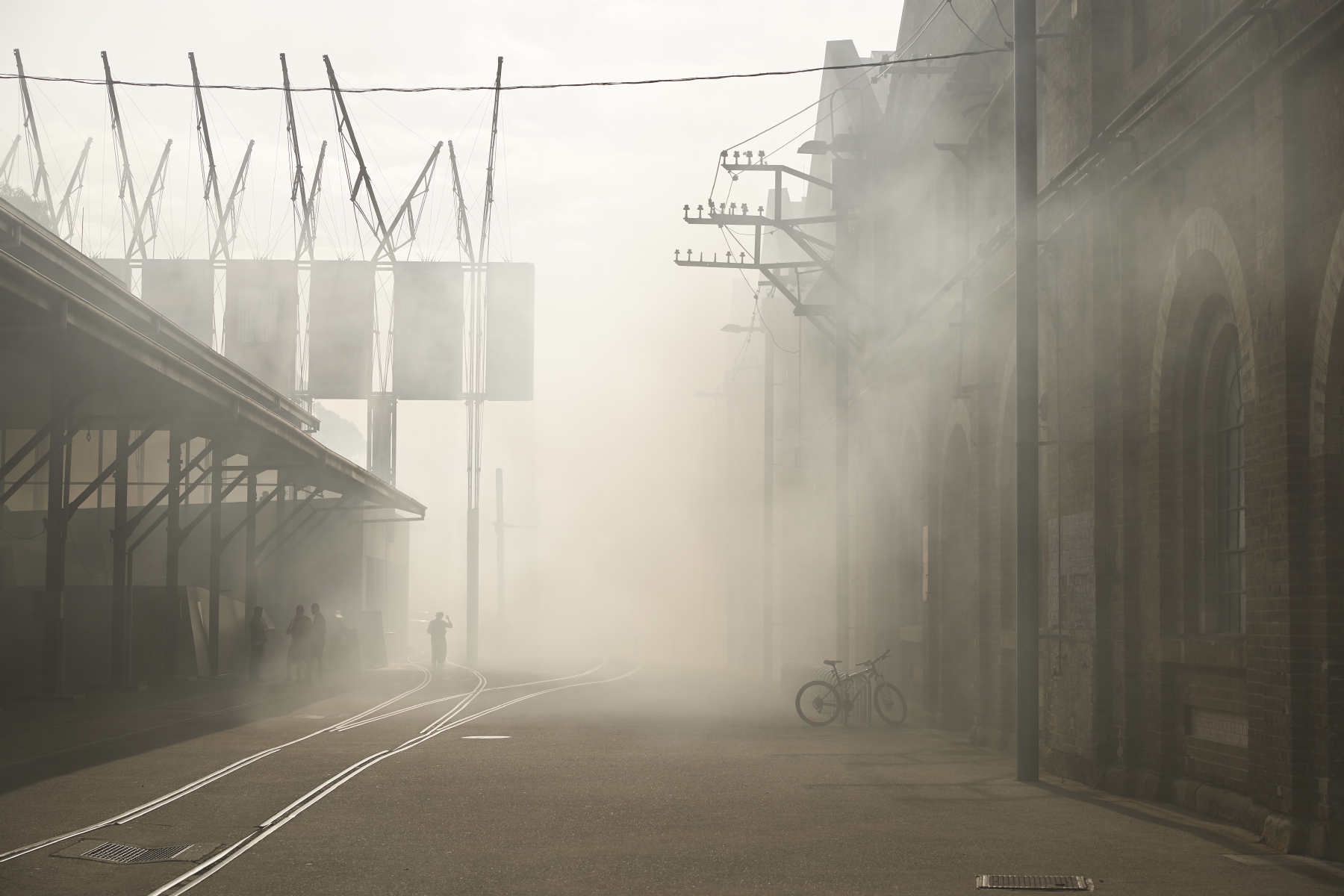 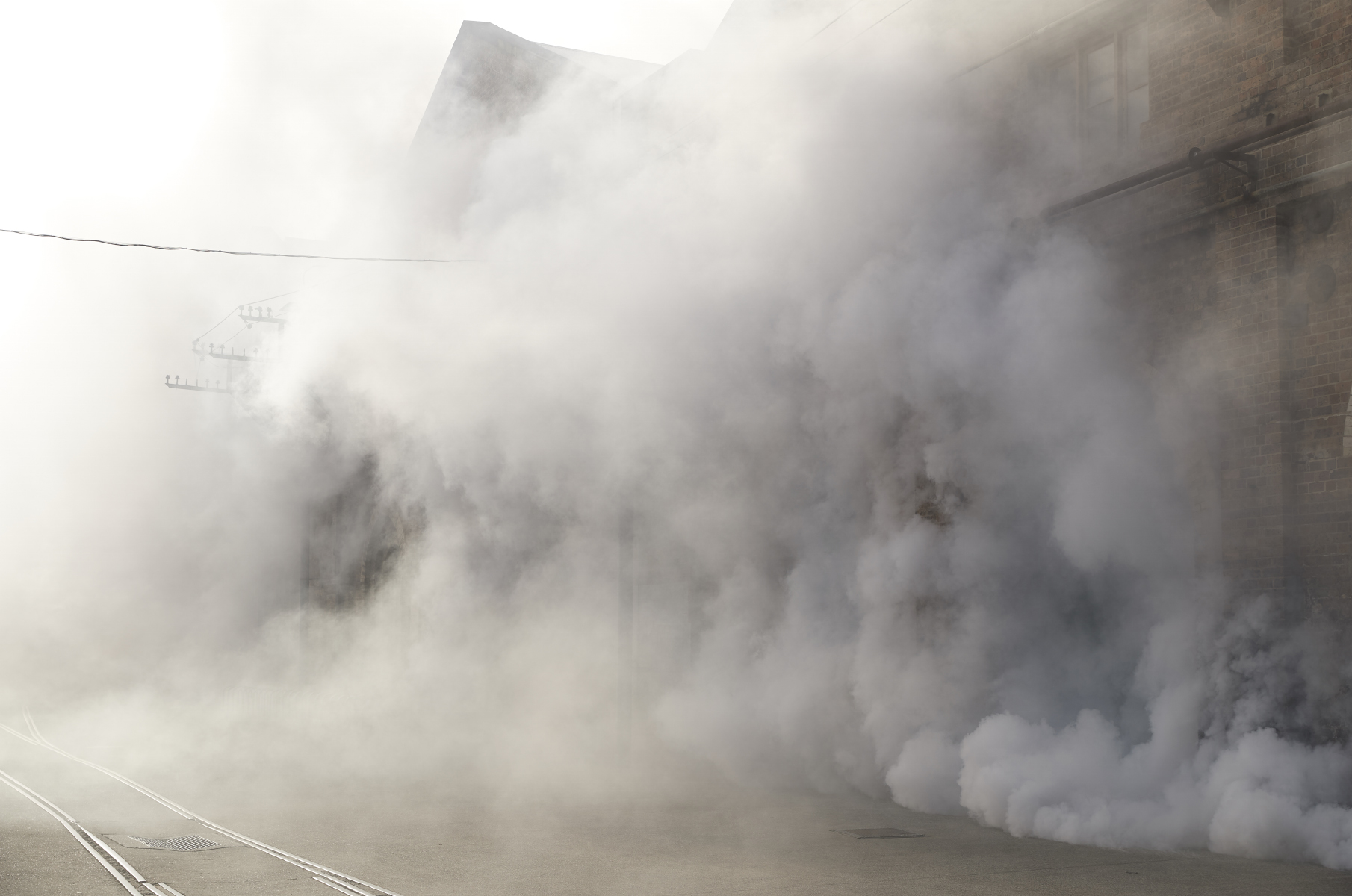 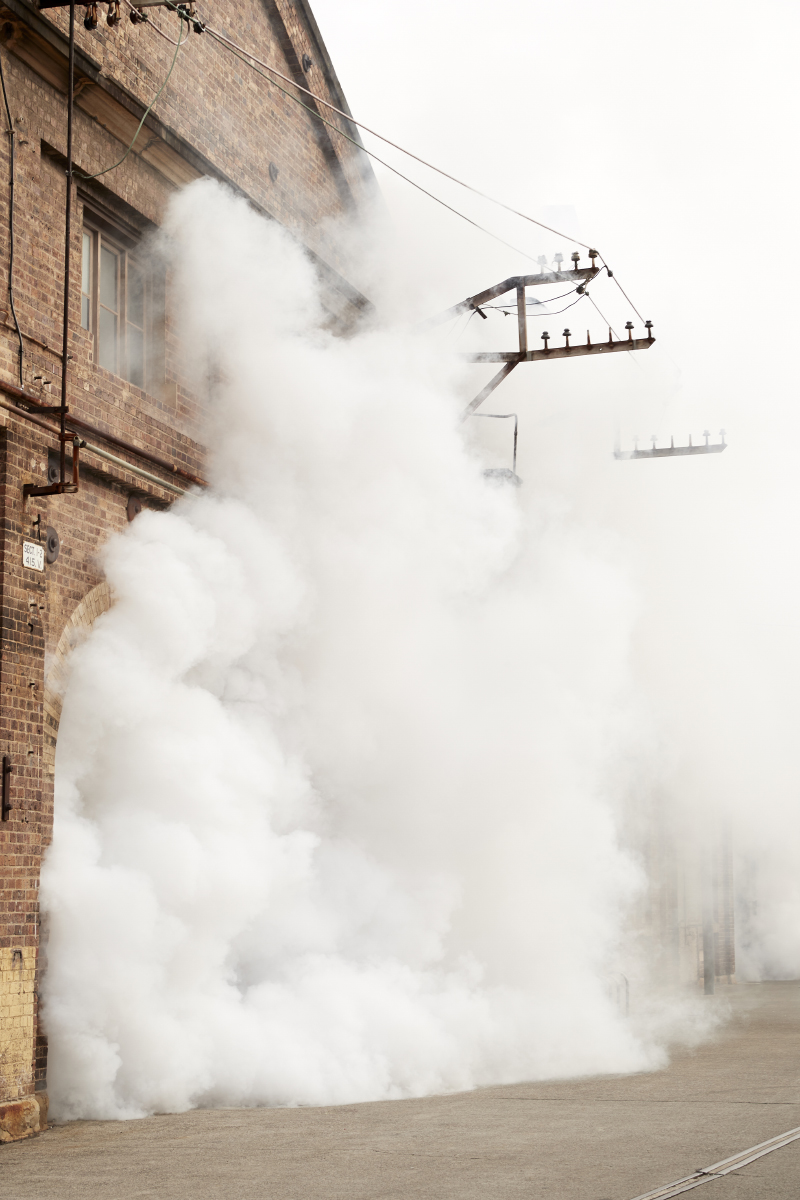 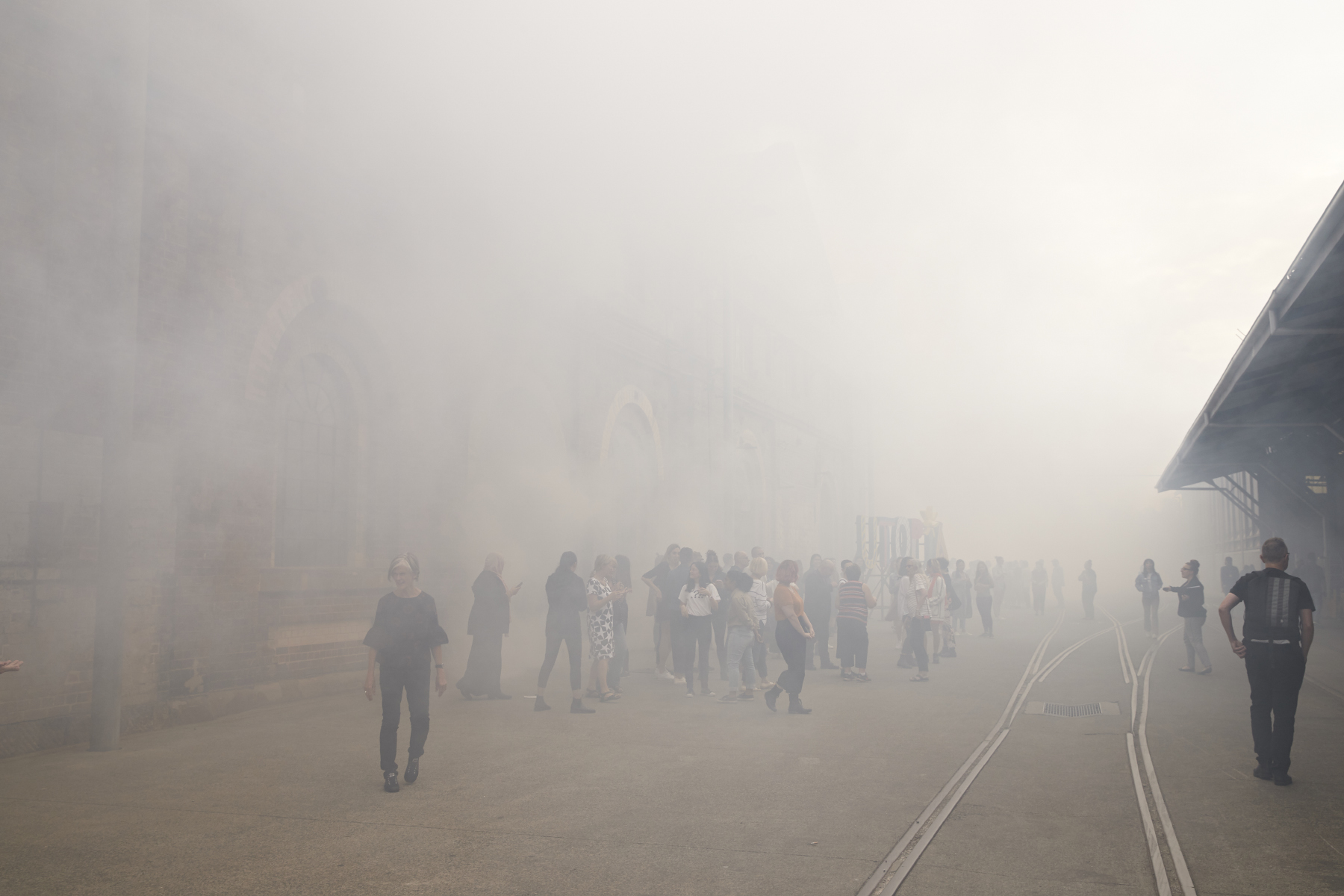 During Carriageworks’ former incarnation as the Eveleigh Railway Workshops, locomotive steam would have been an everyday sight. Tom Mùller responds directly to this history with Ghost Line (2019), a site-specific installation using fog as sculptural matter to animate the Carriageworks precinct with a spectral trace of its past life. Activated twice daily during the course of The National 2019, the work is a temporal and poetic haunting of the past by suspending mist momentarily in time and space. At once a faked natural phenomena and theatrical staging, Ghost Line prompts remembrance and imagination through a fleeting, and possibly bewildering, lapse of vision.

Tom’s on the phone.

When he says, ‘thick, white, milky’, he’s not describing but creating the physical quality of the ‘fog’ – (talking it into reality) – the fog that’s the medium he’s using for Ghost Line (2019), the stuff marking out the space and time of what is, I guess, a large-scale site-performance in its way, a line of cloud (though still fog) that rushes into dispersed being, on the hour, creating, well …

The fog ‘is’ the ‘smoke’ of the steam trains that once passed through and rested, awhile, at Carriageworks when it was the Eveleigh Railway Workshops, announcing itself as poetic (poetic because impractical?) ‘evidence’ of industry and a social and cultural and economic world that is basically a chain of vaporous connections, an associative network re-tracking itself as a haunting (not a reminder).

Haunting (not a reminder), because it comes to life at the level of magic, the conjurer’s medium, (in a puff of) smoke concealing, (as much as) revealing et cetera, pulling us into focus, when, hey, should we be looking elsewhere?

We don’t know! We are overcome! As Tom says, ‘when the smoke [that it is fog, first, and as well] appears, there is an immediate confrontation and it is oppressive [his wonderful word]’, and then you lean into the work: ‘you can master the apprehension without visual reference points’.

Such great, heavy words, their stern stoicism, their purity, their overcoming of the self-ness, pushing into the unknown, moving through our instinct to panic in the face of a sudden sublime as Ghost Line works at the combined level of meniscus, border crossing, faith: that level-state where stories begin and end … as the piece brings the phenomenological back to bear on the historical, the transcendent on the pragmatic.

Oh, clearly, there is something still unsettled, not wholly site-specific, about all this (transient, transitional activity). Confirming it, Tom tells me about a cloud phenomenon, Sils Maria, a snake-like cloud that moves down and through a very high-up valley, swirling. He sends links to a recent-ish film about it (Clouds of Sils Maria), and one from 1924 too, the early one so painful in its longing, the slicing of the human world by something else, displacing us, even now we as we watch it, a mordant shock to the self, such that …

Ghost Line is for sure as much cloud formation as smoke, as fog, too, and I realise in saying this, that I’m right in thinking that it’s as if the work is escaping itself. Staged at Carriageworks, it is always leaving that site even as it brings us back to it. Given that, Tom’s passing phone reference to the Sils Maria cloud formation as ‘mythological’ applies here too. It’s like the modes of mapping he’s dealing with are processes whereby the ceaseless flip between covering, smothering and opening, between this place and all the other places (they multiply), that are the very essence of mapping (that is at the heart of so much of his work), are re-performed in this piece as thickly experienced tricks that captivate, wrong foot and send us back to our bodies, by way of casting us beyond them. 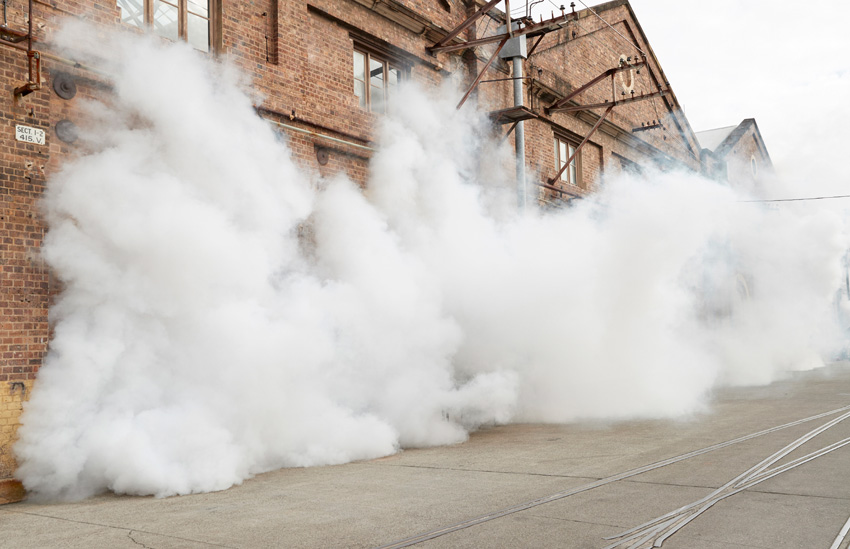